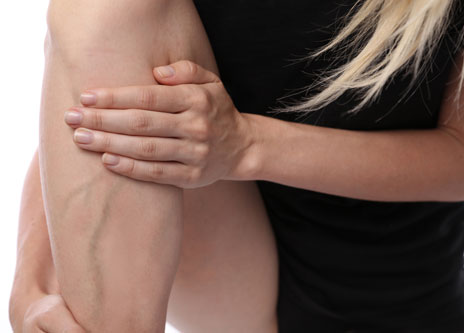 Most people know varicose veins when they see them: large, bulging and, in many cases, unsightly veins in the legs. Caused by leaky valves in the veins that fail to keep blood flowing in the right direction, varicose veins can have obvious effects on a patient’s well-being and confidence. However, they can also become a significant medical issue that can cause:

Spider veins, or telangiectasias, are similar to varicose veins to the extent that they are noticeably visible on the skin surface. While frequently not a medical threat, unsightly spider veins, which occur most commonly on the legs, can have a significant impact on a patient’s confidence.

When do varicose veins and spider veins need to be treated?

The aesthetic issues alone that result from varicose veins and spider veins often have an impact that warrants treatment. Patients have every reason to seek care if they find that their vein conditions disrupt their lives by making them feel uncomfortable or less confident. When one considers the potential medical effects, the case is even clearer, even for those not currently experiencing more obvious symptoms such as pain, irritation, or swelling.

Of even greater concern, however, is that patients with varicose veins or spider veins may be at increased risk of a more serious, potentially life-threatening, but often hidden condition called deep venous disease.

Like varicose veins and spider veins, deep venous disease is a condition that involves the malfunctioning of valves that control the proper direction of blood flow, causing blood to pool in veins deep in the legs. Lifestyle issues such as lack of exercise or sitting or standing for long periods of time can be contributing factors. What makes deep venous disease a more serious concern, however, is the potential for clots to form, or deep venous thrombosis (DVT). A life-threatening event called a pulmonary embolism may occur if a clot formed deep in the legs finds its way into the bloodstream and enters a lung.

When do blood clots in the legs need to be treated?

Due to the potential for permanent damage to veins, timely treatment of blood clots is essential once the condition has been diagnosed. The challenge is that the symptoms are not always obvious. While varicose veins may be a sign of deep vein disease, other more general symptoms are also possible. These include, but are not limited to:

What to expect for your treatment.

Our physicians are all dual board-certified in diagnostic radiology and vascular & interventional radiology—they are uniquely qualified to diagnose blood clots using imaging such as ultrasound, and to treat DVT if needed.

Most patients with DVT require blood thinners. However, if the above symptoms are present, the blood clot may be more serious and may require a non-invasive procedure called “thrombectomy and thrombolysis” to help to remove the blood clots. This is performed in the hospital and patients usually go home the same day.

NOTE: marked symptoms such as lightheadedness, shortness of breath, rapid pulse, dizziness, fainting, or coughing up blood may be symptoms of a number of dangerous conditions, including a pulmonary embolism. If you are experiencing such symptoms, please seek immediate emergency medical attention.

In the past, invasive surgeries, often requiring a hospital stay, were the only options for treating these vein disorders. However, at the Minimally Invasive Care Center, our physicians perform several state-of-the-art minimally invasive treatments delivered through an injection, or by inserting a small probe used to treat the vein from the inside. In several of these procedures, our physicians use ultrasound to precisely guide and actively monitor the treatment of diseased veins.

Before performing these procedures, the physician numbs the area to be treated so that the patient feels virtually no pain during the treatment. After the procedure, the entry area may be covered with a small bandage, and there is generally little if any need to reduce regular activities. For some treatments, the patient may need to wear compression stockings for a few weeks during recovery.

These treatment approaches work in different ways, but what they have in common is that they cause diseased veins to close and, over time, virtually disappear with substantial reduction of symptoms and improved appearance. As the body recovers, blood flow is naturally and safely re-routed through healthy blood vessels.

Depending on the specific characteristics of each patient’s case, our physicians may recommend the following or other procedures.

Sclerotherapy. As one of most frequently used methods for treating venous disease, sclerotherapy has proven to be highly effective and safe. In this type of treatment, a small amount of a liquid medication called a sclerosant is delivered into the leg veins. By irritating the inside of the veins, the sclerosant causes veins to collapse, shrivel and, over a period of several weeks, disappear. Our physicians perform two different types of sclerotherapy depending on the location and extent of disease:

Thermal Ablation Therapies. Our physicians use several treatment methods that expose the inside of diseased veins to carefully targeted heat. The heat irritates the inside of the vein, which helps to shut down its harmful activities in response. Patients may begin to notice results within one week. Full results may take several weeks to develop. The types of ablation treatments, which our physicians recommend based on the specific characteristics of patient cases, differ based on how they produce heat:

Nonthermal Ablation. The word ablation simply means “removal.” The heat-based treatments described above are one of several techniques that can be used to eliminate diseased veins, but there are other methods that do not use heat. The physician uses ultrasound to help guide a catheter into the vein, applying a “glue-like” medical adhesive to the vein wall. While administering the glue, the physician applies pressure along the vein, and the adhesive holds the vein in the resulting flattened shape. In the weeks following the procedure, the closed vein transforms into fibrous tissue that the body gradually reabsorbs.

For more detail about what to expect during these treatments, how to prepare for them, and the post-treatment care process, follow the links below to our patient information packets on:

Will insurance cover my vein treatment?

Many health insurance plans will cover treatments for patients experiencing medical effects or lifestyle-disrupting impacts of vein disorders. Payment terms are also available for patients who self-pay for vein care. We will work with your referring physician and insurance provider to determine availability of coverage and pre-certify coverage when available.

Schedule a Consultation with a Physician